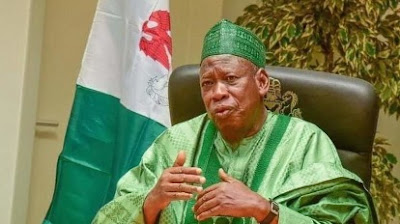 Governor Abdullahi Ganduje of Kano State has said that the southern region of the country should be allowed to produce the next president of Nigeria.

The governor joins his Kaduna State counterpart, Nasir El-Rufai and other prominent northern politicians who had made similar calls in recent days.

“The southern part of the country but there should be a consensus of the members,” he told Channels Television while reacting to a question of which zone should produce the 2023 presidency.

“Zoning system, even though it is not in the constitution of the Federal Republic of Nigeria, is a strategy for winning elections.”

Speaking further, Ganduje said that his party, the All Progressives Congress (APC) will win the 2023 presidential election, adding that the ruling party has done well for Nigerians.

“Also there is a very strong movement now to reconcile the major actors and I think that is also making the party stronger,” he added.