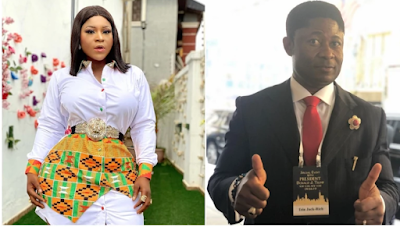 Nollywood actress Destiny Etiko has continued to deny the rumours that she got her car gift from a married man.

The actress is reported to have gotten her car gift from billionaire businessman Tein Jack-Rich, a claim she has denied.

The movie star took to her Instagram Live late Monday, February 8, 2021, where she continued to distance herself from Jack-Rich.

“Na car I buy, I nor kill person. I bought what I love. I love Landcruiser Prado. I bought it with my money. Yes! I work hard. I earn money. Google Destiny Etiko, ask of Destiny Etiko. I work hard. There is never a day I do not work. I work and I earn good money,” she said.
Trending
VIDEO: Driver trying to escape a LASTMA official, hits a policeman off bridge in Lagos

“So I love a car, I bought it. It’ nobody’s business. You people should leave an innocent man alone. Someone I have never met. Looking for whose name to spoil. Do you think it’s my name you’ll spoil? You people are promoting my name, you people don’t know. You people are saying nonsense.”

Etiko has been in the news for days now after posting a video of her new car.

Shortly after she shared the video, rumours began to filter the air on social media that the SUV was gifted to her by a popular married oil businessman.