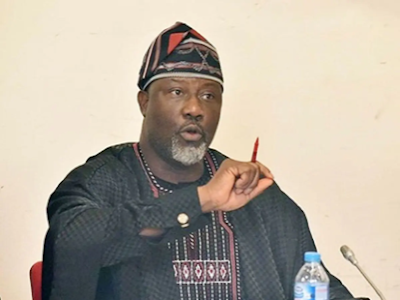 Dino Melaye, Former Kogi lawmaker, has described the All Progressives Congress, APC, as a redemption camp for politicians.

Melaye made the comparison on his Twitter page on Monday

He alleged that any politician that steals and joins APC will be forgiven and their corruption cases dropped.

”APC is a Redemption camp. Steal and renounce your party, join APC and your sins are forgiven, EFCC cases dropped and seized passports returned. Jekinje party, ” he wrote.

This is coming after the Minister of Interior, Ogbeni Rauf Aregbesola, raised the alarm that ”killers have joined APC”.

Aregbesola had said “Though the constitution allows everyone to register as a member of any political party, even if they are suspects, murderers, character assassinators, etc, but those who constitute the majority of the party membership must represent the core values of the party.

“There must be a clear distinction between jolly good fellows and fair-weather friends who will still leave our party when they sense a better opportunity elsewhere.”