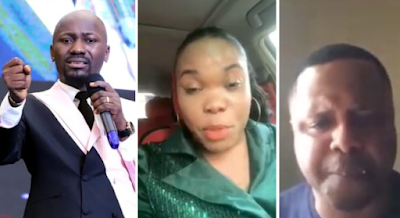 Apostle Johnson Suleman, founder of Omega Fire Ministry (OFM) has reacted to the audio recording released by Mike Davids, a former pastor at the ministry, alleging that he threatened to “make him disappear”.

The controversy started when Davids alleged that Suleman slept with Faith Edeko, his wife, who currently heads the Abuja branch of Omega Fire Ministries in Utako.

There were reports that the inspector-general of police had ordered a probe of Suleman over the matter but the cleric vehemently dismissed the claims.

However, Davids later filed a N2 billion lawsuit against the clergyman, accusing him of destroying his home and also barring him from seeing his kids.

David went on to release an audio he claimed to have recorded in one of their phone conversations, where Suleiman could be heard making threats to his life.

Reacting, Suleiman agreed that the voice in the recording was his, but it was from a conversation he had with a young lady three years ago.

He also apologised for reacting angrily, stating that he is no longer the man he was at the time.

“There is a viral audio that is going on now of me threatening somebody over the phone, telling the person to stay off my phone or the person will die prematurely. That voice was me. It happened three years ago. I reacted out of anger and I am sorry about it,” he said.

“After 2017, my mentality to life changed, I became very unreceptive. That was me on the phone threatening a young lady to go off my phone and stop talking to me. It was a mistake I made out of anger. It happened two years ago. I’ve apologised to my wife for allowing anger to get a hold of me.

The pastor also stated that the recording was doctored by Davids, as he had not spoken to him for two years.

He continued: “But we are so disappointed at Mike Davids that he has released an audio where he doctored and put his own voice and present to the world like I was threatening him after he did a video about his wife. Why will I call you to threaten you when your video made no sense? Mike Davids, I want to advise you. You can still repent right now.

“You dissolved your marriage with your wife and she was suffering and we decided to help her. You said no she must eat from the gutters, she must suffer. As a father who raised her up, should I let her suffer? My wife spoke to me on the need for us to take care of her and the children.

“You said you want your wife back, you live in Abuja with your wife but you’ve never called her.”