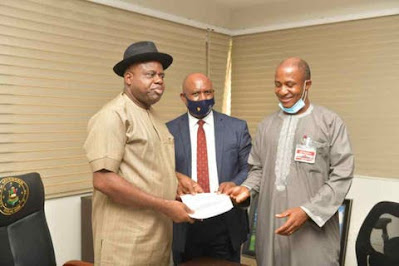 Bayelsa State Governor, Senator Douye Diri, has urged youths in the state to take advantage of his administration’s agricultural drive to develop themselves and the state.

Governor Diri stated this on Thursday during the signing of a Memorandum of Understanding (MoU) with CSS Integrated Farms Limited for the training of farmers in the state.

The governor, in a statement by his Acting Chief Press Secretary, Mr. Daniel Alabrah, said the aim of the partnership with the private sector is to realise the agricultural potential of the state.

He urged the youths to shun all forms of social and political vices and put themselves forward to be trained in the agricultural sector in order to be self-reliant.

Governor Diri remarked that interested Bayelsans would not only be trained in different areas of agriculture but will also be engaged by the state to put the knowledge acquired to work.

His words: “I have been waiting for this day. We have tagged our government Prosperity Administration. Bayelsa is rich in oil and gas and other natural resources. We also have a lot of land areas for agriculture. Our comparative advantage is in rice, plantain, fisheries and cassava. The MoU is to train our unemployed youths and then become employers of labour and create wealth in the land.

“For our teeming youths, being involved in drugs is no solution. It can never make you rich nor prosperous. But if you want to tap into the gospel of prosperity of our administration, this is the opportunity.

“We are inviting you to join the prosperity train and we don’t care if you are APC or PDP.”

Diri also charged the Ministry of Agriculture to ensure that Bayelsans across all party lines are involved in the training as a way of spreading prosperity to all.

He expressed optimism that the signing of the MOU would open a new vista of opportunities for development, saying Bayelsa is very safe and open for business.

He equally assured of the state government’s unwavering commitment to developing agriculture, saying it holds the promise of a prosperous Bayelsa.

Earlier, Chairman and Chief Executive Officer of CSS Integrated Farms Limited, Rev. John Okpara, stated that Bayelsa is one of the few states yet to access the Central Bank of Nigeria (CBN) agric loans, saying the MoU would help the state access such funds.

He noted that with the signing of the MoU, farmers and non-farmers can be trained and helped to grow in agriculture business and advised Bayelsans to take advantage of the training.

Speaking shortly after the signing ceremony, the Commissioner for Agriculture, Chief David Alagoa, said the MoU has four areas of focus, namely fisheries, rice production as well as plantain and cassava.

He said the government would establish farms for those trained with the aim of revolutionising agriculture in the state.

Chief Alagoa said a template would soon be made public on how youths can get involved in the training and assured that in line with the governor’s directive, selection will cut across all local government areas and political parties.