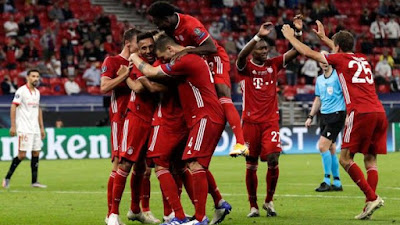 Bayern Munich, the juggernauts of European football have asserted their dominance in Europe beating Spanish side Sevilla to becoming UEFA Super Cup champions.

The German giants didn’t have it easy, however, they prevailed over the Europa Cup winners 2-1 in a fierce contest.

Sevilla got the early lead in the match from a Lucas Ocampos penalty in the 13th minute after Ivan Rakitic was fouled by David Alaba.

Bayern leveled things up before the break courtesy of Leon Goretzka’s calm finish. The German club had two goals ruled out in the second half, one for offside and the other for a foul in the build-up.

The match ended 1-1 in full time until Bayern through a sublime header from Javier Martinez got a second goal to retain their dominance as Europe Champions.

With Bayern Munich’s win today, the German side have won their second Uefa Super Cup Trophy after winning their first against Chelsea in 2013.