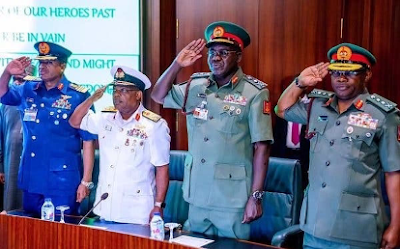 Nigeria’s immediate past Service Chiefs have appeared for screening as non-career ambassadorial nominees.

They arrived at the National Assembly complex at exactly 11.32 am.

Upon their arrival, they went straight to the Office of the Special Adviser to the President on National Assembly Matters (Senate), Senator Babajide Omoworare who immediately led them to the hearing room.

When it was 12 o’clock, the time the screening was to start, the Chairman of Senate Committee on Foreign Affairs, Senator Adamu Muhammad Bulkachuwa ordered an executive session with the members of the committee who were present in their good numbers.

Executive sessions were meant to address and harmonise opinions to avoid issues that are likely to trigger controversies.

Activities of high profile nature like the screening of ex-Service Chiefs are supposed to be covered by the Senate Press Corps, but in this case, the Committee Clerk didn’t request for coverage which may not be unconnected with the controversy that greeted their nomination.

But the screening attracted so much media houses to the NASS on Thursday because of the publicity that their appointment had generated.

It was gathered that the immediate past Service Chiefs were nominated as non-career ambassadors by President Muhammadu Buhari in less than two weeks of their voluntarily retirement from service.