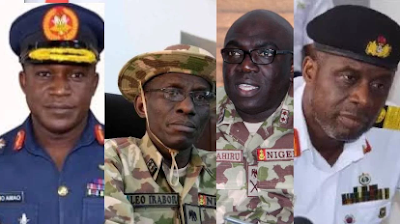 The newly appointed Service Chiefs are being screened by the Senate Committee on Defence.

The new Chief of Defence Staff, Maj. Gen. Leo Irabor, from Delta state in the south.

The Chief of Army Staff, Maj. Gen. Ibrahim Attahiru from Kaduna in the north.

The Chief of Navy Staff, Rear Admiral Awwal Zubairu Gambo, from Kano in the north and the new Air force Chief of Staff, Air Vice Marshal Isiaka Oladayo Amao, from Osun State, all appeared for screening on Tuesday.

The designated Service Chiefs were appointed by President Muhammadu Buhari on the 21st January 2021 following the resignation of Lt. Gen. Yusuf Buratai led former ones.