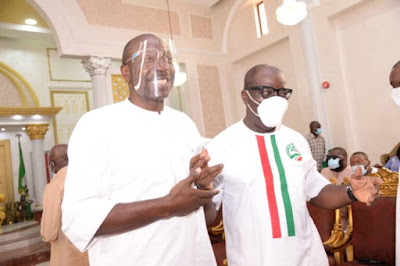 It is a matter of hours to September 19th, 2020 when the people of Edo State will once again file out to observe an important democratic ritual. That day, the people will once again defy the elements and come out and congregate in 2,627 polling booths to participate in the off cycle Edo State Governorship election.

They will be choosing who will govern them for the next four years.

All political parties have concluded their campaigns while most of the state’s 2,210,534 resident of the State who have picked up their Permanent Voter Cards, PVCs would be deploying the small, but mighty civic instrument to decide the fate of the gladiators.

Nearly 500,000 voters have failed to pick up their PVC from INEC office.

The election will be conducted in 193 wards in 18 Local Government Areas of the State.

14 political parties and their candidates made up of 12 males and 2 females are jostling for the Edo State apex job. Only few of them are truly in contention while others are just marking time on the ballot.

Here are the roll call of all the candidates, both the contenders and the pretenders.

The Frontline candidates are:

Godwin Obaseki:  He is from Benin City and the incumbent governor. He is an experienced stockbroker and economist. Although Obaseki came to office on the platform of the All Progressives Congress, APC, he lost the battle for the party ticket in his second term voyage.

He has since defected to the Peoples Democratic Party, PDP to crystalise the ambition. He is standing as PDP candidate in the election.

Pastor Osagie Ize Iyamu: He is the governor’s main challenger and candidate of the All Progressives Congress, APC in the election. He was Chief of Staff to former Governor Lucky Igbinedion and once campaign Director General for the reelection of former Governor Adams Oshiomhole.

Iyamu’s grassroots appeal and federal connections are factors that give him favourable ratings in the poll.

Isaiah Osifo Uhun-Ekpenma: The former Chief of Staff to erstwhile Governor Oserhiemen Osunbor is the standard bearer for Labour Party LP. Although not favoured to win the race, he is strong enough to pose a threat to the front runners.

The other candidates that can best be regarded as pretenders and their parties include Obhafuoso Paul will fly the flag of  Action Alliance, AA while  Akhigbe Ehiabhi will stand for the African Democratic Congress ADP in the election.

Similarly, Ibio Emmanuel is the candidate for Action Democratic Party ADP and Lucky Idehen is candidate of All Progressives Grand Alliance, APGA.

In the same vein,  Agolebun Tracy, one of the two ladies in the race will stand in for the Nigerian People’s Party, NPP, while Stevie Ozono is for National Rescue Movement (NRM); Felix Obayagbon will contest on the platform of Social Democratic Party, SDP; Jones Osagiobare will run on the platform of the Young Progressive Party (YPP), while Zenith Labour Party (ZLP) would field Akhalamhe Amiemenoghena.