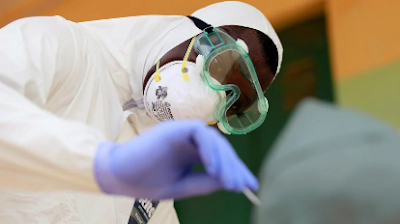 The Nigeria Centre for Disease Control (NCDC) has said that a new variant of COVID-19 has been detected in Nigeria and 15 other countries.

The new strain, B.1.2.5, which is different from the highly infectious B.1.1.7 has, however, not been described as a variant of concern yet.

Disclosing this at the Presidential Task Force on COVID-19 briefing on Monday in Abuja, the NCDC Director-General, Chikwe Ihekweazu, said that researchers and scientists were still working hard to understand if the variant had any effect on the virus’ transmissibility, immunity as well as diagnostics, vaccines and therapeutics.

He said, “As we shared, a total of 54 cases with the B.1.1.7 variant strain, which is a variant of concern first described in the UK, have been detected in Nigeria.

“There is a new variant, the B.1.2.5, which we have begun to detect in Nigeria and 15 other countries. It is important to note that this variant has not been described as a variant of concern yet.

“Researchers and scientists are still working hard to understand if this variant has any effect on the virus transmissibility, immunity, as well as diagnostics, vaccines and therapeutics.

“This is because the variant has some similar mutations with the B.1.1.7, B.1.351 and P.1 variants first detected in the United Kingdom, South Africa and Brazil, respectively.”

The NCDC boss stated that the agency was scaling up its sequencing capacity to have a better understanding of the burden of variants of concern in the country.

He noted: “Last week, we sent another 100 samples to our colleagues at the ACEGID lab in Ede, and we did 30 sequences in our lab at NCDC.

“We will continue to scale the weekly number of samples sequenced as part of our surveillance.”

According to him, the risk of virus mutation is higher when there is high transmission of the virus.

“While sequencing is important for us to understand the situation, handwashing, physical distancing and the proper use of face masks are very important to prevent the spread of the virus,” he further stressed.

The NCDC boss said that the September and October 2020 household prevalence surveys carried out in Lagos, Enugu, Nasarawa and Gombe States revealed the level of SARS-CoV-2 antibodies among the population.

“The findings from the survey show that the estimated prevalence of SARS-CoV-2 antibodies in the population is 23 per cent in Lagos and Enugu States, 19 per cent in Nasarawa State and 9 per cent in Gombe State.

“We are still working on a better understanding of SARS-CoV-2 which is the virus that causes COVID-19 and the duration of immunity,” he said.