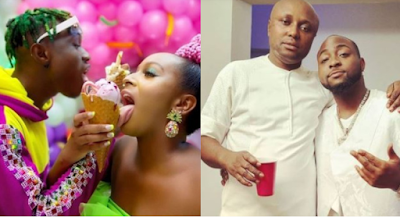 Singer Davido has reacted to the legal threat from DJ Cuppy against his associate, Israel DMW, for levelling some allegations against her concerning rapper Zlatan Ibile.

It all started when Zlatan, during an interview on Soundcity’s ‘TheSwitch’ show, denied knowing who Cuppy is. This is despite both celebrities having a song together titled ‘Gelato’.

He said this just weeks after Cuppy revealed that she was blocked by the rapper on all social media platforms.

Reacting to Zlatan’s statement, Israel hinted at why the rapper may have denied knowing Cuppy on TV. According to him, Zlatan never profited from the deals he had with her.

In response, Cuppy revealed that the agreement on the Gelato song with Zlatan has not been breached in any form. Sharing on social media, she threatened to sue Israel for libel and defamation.

She said, “For the record, there have been no breaches of my contractual agreement regarding the song #Gelato as confirmed by lawyer. However, as @IsrealDMW publicly inaccurately declared I owe an artist money, I am suing him for libel and defamation! See you in court Isreal.”