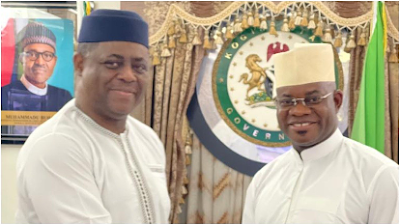 Abuja-based activist, Deji Adeyanju, has mocked Femi Fani-Kayode, the former Aviation Minister over his alleged defection to the All Progressives Congress, APC.

Recall that Governor Yahaya Bello of Kogi State had confirmed Fani-Kayode’s defection to the APC.

This followed a meeting between the former Minister, Bello and APC Interim National Chairman, Malam Mai Buni in Abuja.

However, Adeyanju wondered if Fani-Kayode would now begin to jump from state to state to “to hustle at his old age.”

In a series of tweets, Adeyanju wrote: “My guy secretly defected. He doesn’t want the world to know about his decamping. He now wants to build bridges -Julius Berger.

“Will FFK now start going from state to state to visit APC governors or from one ministry to the other to hustle at this old age? Anyways, I wish him well. May he find what he is looking for.”