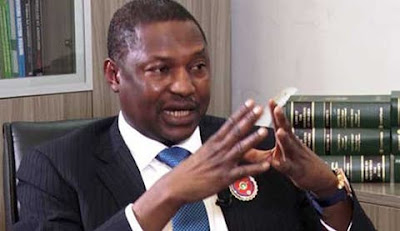 The Attorney-General of the Federation, Abubakar Malami (SAN), has said the Federal Government was not wrong to freeze the bank accounts of 20 #EndSARS campaigners.

“Government is not wrong particularly in circumstances that justifies intense investigation. It is the end result of an investigation that can determine whether government is right or wrong as determine by the court on the basis of the facts presented,” he said.

Malami, who is also the Minister of Justice, said on Channels Television’s ‘Politics Today’ programme.

It was earlier reported that following the destruction that trailed the #EndSARS protests last October, the Central Bank of Nigeria obtained a court order to freeze the accounts of 20 #EndSARS promoters.

However, a Federal High Court in Abuja on Wednesday ordered the CBN to unfreeze the accounts of 20 #EndSARS campaigners.

Speaking hours later on the decision of the court, Malami said the decision to comply with the court order or not is not a decision that is a product of intimidation, adding that the government cannot be intimidated.

He said, “The decision to comply with the court order or not is not a decision that is a product of intimidation; government cannot be intimidated, government cannot in anyway be compromised as far as the exercise of its constitutional powers are concerned but that does not mean the government is perpetually inconsiderate.

“The bottom-line is that the public interest matters most in whatever decision the government arrives at as far as compliance or non-compliance with the orders or judgment of the court are concerned. Intimidation is out of it, threats are out of it, constitutionality is the bottom-line.”

The AGF further said the administration of President Muhammadu Buhari was lenient with the #EndSARS protesters, saying no government all over the world can tolerate a situation where scores of policemen were murdered because citizens expressed their rights to lawful assembly and freedom of expression.

He stressed that the government would continue to protect Nigerians and their constitutional rights.

“The government is there to ensure there are no security threats and in so doing the true position of things is that it is the responsibility of the government is to accord protection to the lives of the citizens, their personal liberty, freedom of movement, and indeed accord protection to all the constitutionally guaranteed rights of individuals.

“So, the government, can on no account be forced to submission when protection of these rights are concerned,” the minister noted.