Home » News » Extend amnesty to bandits in South, everyone with gun —Sheik Gumi 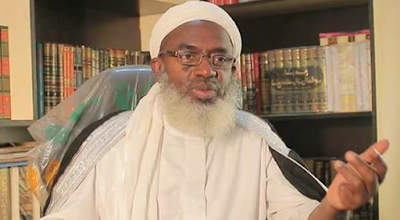 Kaduna-based Islamic cleric, Sheik Ahmad Gumi, on Sunday said the amnesty he proposed for bandits in the North should be extended to the Fulani involved in kidnappings in the South.

Gumi, who stated this in an interview with one of our correspondents, also said the bandits involved in kidnappings were not foreigners, but Nigerians.

The prominent cleric had after a meeting with bandits in Zamfara State forests two weeks urged government to grant them amnesty.

He also met bandits along Kaduna-Abuja road, which had witnessed a series of kidnappings and killings.

After the kidnapping at Kagara, Niger State on Wednesday, Gumi also visited the state and held a meeting with some bandits.

Justifying his call for extension of amnesty to the South, Gumi said everyone carrying a gun should also be included for the country to have a fresh start.

He noted that northern governors, except Kaduna State Governor, Nasir El-Rufai, had accepted his reaching out to bandits in the North.

Gumi insisted that the bandits involved in kidnappings were not foreigners, but Nigerians.

He said, “People don’t know the Fulani at all. They are not after money. Even when they are burning houses in Oyo, don’t you see where they live? They stay in huts. They are not into buying flashy cars. They just like their cattle. The money they are collecting from kidnappings, they are buying weapons with them. The more you fight them, the more they fight back. They don’t surrender. They are saying if the air force continues to pester them, they will have to get anti-aircraft.

“Not all of them are criminals; the hard-line (position)  taken against them turned them into the militants that they are. They showed me a village, which does not belong to the Fulani, but was bombarded by the air force. A well was filled with dead bodies. The air force killed them because they thought it’s a Fulani enclave, if they are Fulani, what about the wives and children? It is the military that produced these monsters, just like they did with the Boko Haram. We need dialogues with them.

“I am encouraged because I have started seeing instant results. The bandits; nobody can call them except we use the religious card. So, these people making noises, let them try to see if they can get them to listen. They don’t respect any authority because they have formed an authority of their own. But if you speak to them and say, ‘This is sacrilege to the sanctity of religion, they’ll listen. So, why won’t we explore it?

“I spoke to the warlord there (Niger State) and he does not know the current situation of things (about the kidnapped Kagara pupils). There is a communication gap because the forest is vast. The terrain does not leave room for expediency. But I believe that ultimately, they will be released today (Sunday). They could have been released now, but before they get to the town, it will take time. When we left them (the bandits), it took us from 6pm to 3am before we reached home.”

He said like the Federal Government gave the people of the Niger-Delta amnesty, the same gesture should be extended to those carrying guns in the country.

“It should be a blanket amnesty, not only the Fulani. Anybody that is carrying weapons, you give him amnesty. Let’s do it for all these people carrying weapons and Nigeria will open a new page. Don’t be surprised, these Boko Haram people, if you approach them the way you approach these people (bandits), they will listen. If you talk, it is better than all this language of might. Dialogue will give you what violence cannot give you.

“El-Rufai is the only one left. There is no other governor. But he is a very intelligent man, and if he sees reason, he will (key into my mission). I don’t see any governor that will not key in. The more you get close, the more you see reason with these people, and to ask why are they doing it,” he added.