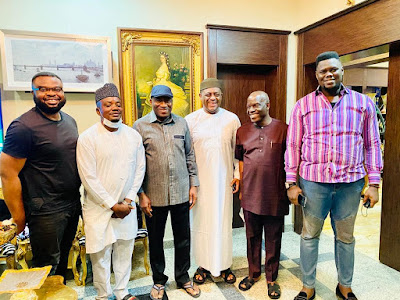 The former minister met with Jonathan at his Abuja home on Tuesday evening amidst rumour that he may have concluded plans to dump the Peoples Democratic Party for APC following his series of meeting with leaders of the ruling party in the past few days.

Also, the PDP government in 2006 appointed him as the Minister of Culture and Tourism.

He was later redeployed to the Aviation Ministry as the minister the same year after a minor cabinet reshuffle.

But he had dumped PDP to join the yet to be registered APC in 2014.

“I had a meeting with Gov. Kayode Fayemi afterwards and I have just publicly and formally declared for the APC,” the former minister said. “For me this is a great and historic day. Goodbye forever PDP,” he said.

But despite his ‘goodbye forever PDP’ assertion, he returned to PDP just before 2015 general election after he also met with former President Jonathan.

He said his return to PDP, the he said then, followed his realization that Jonathan was a responsible leader.

PDP rewarded him with appointment as the Director of Media and Publicity of 2015 Jonathan/Sambo Presidential Campaign organization.

With Jonathan failing to get re-elected as President, Fani-Kayode has emerged as a trenchant critic of President Muhammadu Buhari, Vice President Yemi Osinbajo and the APC government since 2015

Despite his history of ‘political instability’ Nigerians were nevertheless surprised when he met with Chairman, Caretaker/Extra-Ordinary Convention Planning Committee Gov. Mai Mala Buni and Kogi State Governor Yahaya Bello at a Guest House in Abuja on Sunday.

The closed-door meeting, which lasted for about an hour, was brokered by Bello, who is also chairman of the party’s Mobilisation and Sensitisation Committee for ongoing membership registration and revalidation exercise.

Fani-Kayode had a day before met with Bello in his Wuse Zone 6 residence in Abuja before he led the former Minister to the party Chairman’s Guest House.

He had also met with the APC Senator representing Kogi West in the Senate, Smart Adeyemi, a day before.

The former minister’s mostly anti Buhari/APC supporters and fans had criticized him over his meeting with officials of the ruling party.

Some top members of APC had also expressed their reservations about the prospect of Fani-Kayode’s return to their party.

Defending his meeting with the APC leaders, the former minister had in a statement posted on his Facebook page said it was about, “state of the nation, pressing national issues, party politics and the way forward. He also criticized those condemning the meeting.

“Despite the obvious benefits and wisdom in this noble initiative it amazes me that some people should feel that it is wrong for me to sit with other leaders in the country to discuss issues which touch and concern the national cohesion, future and stability of our country,”Kayode said.

“I can and will never compromise or jettison my core fundamental principles for any reason and I stand firmly on my honestly held opinion that we need to enthrone equity, justice and fairness in this country for it to survive. I also believe in restructuring the country and in a vigorous and effective fight against terrorism. The fact that I am in talks with leaders from a cross-section of political parties, including the ruling party, does not in any way derogate from this and does not mean that I will ever change those views,” he added.

But Fani Kayode failed to deny or confirm speculations that he was on his way to APC in the statement.

Also while announcing his meeting with the former President Jonathan on Tuesday evening, the former minister refused to say if he is returning to APC or staying put in PDP.

He, however, described the former as best Nigerian president ever: “My team and I had the honor and privilege of spending a wonderful evening with President Goodluck Jonathan in his Abuja home earlier tonight. None like him.”

Earlier, he had warned about attributing quotations not taken from his social media pages to him. “I would advise Nigerians to be very wary about fake quotations that are being attributed to me concerning other political leaders in the country. If you did not read it on my verified twitter handle or my verified Facebook page then I NEVER said it. Period.”