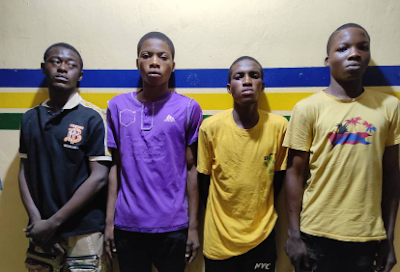 The mother of the victim, Tawa Abbey, of No 200, Mafo Bus Stop, Idimu Road, Ejigbo, reported the incident to the police.

Abbey said her daughter (name withheld) went to buy food at Lafenwa Street, Ejigbo, when a group of boys accosted her with dangerous weapons and threatened to kill her.

They forcefully had carnal knowledge of the teenager in a room at No 33, Alhaji Obe Street, Ejigbo.

Items recovered from them included cutlasses and substances suspected to be Indian hemp.

Commissioner of Police, Hakeem Odumosu, has ordered the Divisional Police Officers to rid their areas of criminals.

He directed that the Ejigbo matter be transferred to the Gender Unit of the State Criminal Investigation Department, Panti in Yaba, for investigation and prosecution.