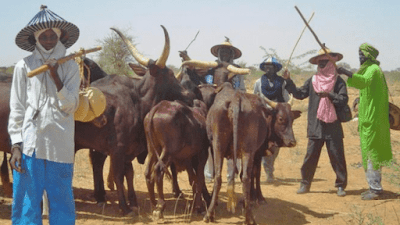 A Fulani herdsman has escaped after he was caught spying on some Yoruba Kings and traditionalists during a meeting in Ibadan, the Oyo State capital.

The meeting was to address the worsening security situation in the South West region.

However, there was apprehension at some point of the gathering, after a suspected Fulani herdsman spied on them and bolted away as soon as he was detected.

This development was said to have drawn the anger of Sango worshippers, hunters who rained curses on him.

His Royal Majesty, Oba Moses Oladejo Oyediran, Ogunsua of Modakeke was just about to drop the microphone when one of the organizers announced the presence of the herder.

He said, “We just discovered that a Fulani herder had just spied on us at this meeting. He had recorded all the proceedings and when he noticed he had been detected, he ran away”.

“All the traditionalists here, you saw what happened. You should do the needful. We didn’t invite him”.

Speaking earlier in the meeting, Oba Oyediran had called on all traditionalists to put their ‘resources’ together to fight the common enemy.

“We are the powers that our forefathers left for us. When these powers are there, why then should these aliens trample upon us. They came to us with sticks, clubs. If it was in the olden days, Oro would come out,” he said.

“Yoruba has a lot of traditional security systems but we don’t use it. If you have friends or relatives that you are not compatible with, then they stay away from you.”

He said the traditionalists must come together and apply the defense mechanism that their ancestors have provided for them to fight insecurity in the region.

“Let all the traditionalists come together; combine their powers to fight the common enemy,” he beaconed.