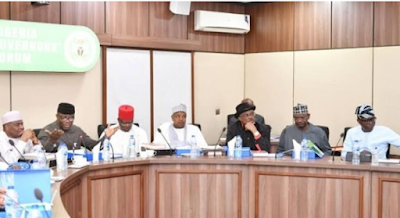 The Nigeria Governors’ Forum (NGF) has asked the federal government to halt deductions from the statutory allocation to the local government for the construction of 774 healthcare centres across the country.

At an emergency meeting held on Thursday, the governors “rejected the legality and the legitimacy of the contract, including all financing arrangements”.

In a communique issued at the end of the meeting and signed by Aminu Tambuwal, governor of Sokoto and vice-chairman of the forum, the governors asked the federal government to also halt the disbursement of already deducted funds.

“Governors expressed serious concern over deductions from the Federation Allocation of the 774 local governments of the country to construct and equip healthcare centres in each local government area on behalf of the Association of Local Government Areas of Nigeria (ALGON),” the statement read.

The governors resolved to “constitute a Committee comprising the Governors of Ekiti (Chairman), Ebonyi, Delta, Gombe, Plateau, and Kano States to represent state and local governments on the matter.

“The Committee will also approach Mr. President, the Minister of Justice and Attorney-General of the Federation, the National Judicial Council and the Minister of Finance, Budget and National Planning to appeal against the judgement.”

The forum further cautioned the Nigeria Labour Congress (NLC) and the Trade Union Congress (TUC) against embarking on industrial actions over the hike in fuel price and electricity tarrif.

According to the governors, fuel subsidy encourages corruption, which leads to loss of revenue for government at all levels.

It warned that “any strike action will worsen the currently deteriorating economic situation of the country brought by the COVID-19 pandemic”.

The governors, instead, “suggested the provision of a cushioning arrangement to ameliorate the effect of subsidy removal”.

They resolved to: “Set up a Committee made up of the Governors of Jigawa (Chairman), Nasarawa, Ogun, Kwara, Gombe, Abia and Bayelsa States to interface with the National Economic Council, the Labour Unions and relevant stakeholders for the overall interest of the nation,” while “the NGF Secretariat will provide relevant support to the Committee on the details of the mechanism for deregulation put in place by the federal government.”

The NGF also said it would “call for an Emergency NEC meeting as soon as the Committee comes up with a common position on the deregulation of both the petroleum and power sectors and the figures laid bare for all to see”.