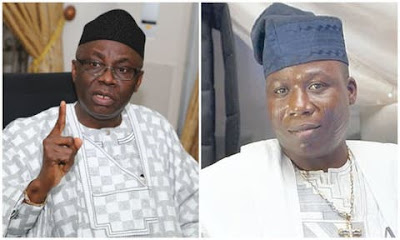 Serving Overseer of the Citadel Global Community Church in Lagos, Pastor Tunde Bakare, has said that popular Yoruba rights activist, Sunday Adeyemo, well known as Sunday Igboho must act within the ambits of the law to avert inter-tribal crisis in the country.

Bakare, who said he planned to meet with Igboho very soon, stressed that indiscriminate violence was not the way to handle the current herdsmen crisis rocking parts of the country.

“Igboho looks like a man who wants to fight for his people because they were murdered and raped but he must operate within the ambits of the law.

“Indiscriminate violence is an ill-wind that will blow no one any good and remember before you attack the Fulani in the South-West, there are Yorubas and other ethnic nationalities living in their own communities too and if they open fire on them, it will be so indiscriminate and we must avert it.

“It is an ill-wind and we must avert it before it gets out of hands,” the cleric said on Thursday while featuring on Arise TV’s The Morning Show.

Bakare further said that the Ooni of Ife, Oba Adeyeye Ogunwusi, as well as other monarchs and leaders of thought in Yorubaland must be respected.

It was reported on Wednesday that Igboho said the Ooni disappointed the Yoruba people when he visited President  Muhammadu Buhari of recent over the herdsmen crisis rocking the South-West region.

The activist, who issued a seven-day quit notice to herdsmen accused of sundry crimes in the Ibarapa area of Oyo State and enforced same, said Oba Ogunwusi failed to convey the pains and displeasure of the Yoruba people to the President during the visit.

Hours later, Igboho, however, begged for forgiveness from the the monarch whom he described as a father.

Commenting on the matter on Thursday, Bakare said, “I am glad that he has apologised. The ancient stool of Ile-Ife, the Ooni of Ife must be respected and all Obas should be respected and no one should drag them or their names in the mud.

“One of the things that men of goodwill needs to do is that we can see that what is causing this is leadership deficit in almost all over the country, South-West inclusive, we have to avoid all reckless rhetorics, we are not barbarics, we must not allow those things to be in the front of the burner at all.”

The cleric called for end to open grazing in order to stop the Fulani herdsmen and farmer clashes rocking parts of the country.