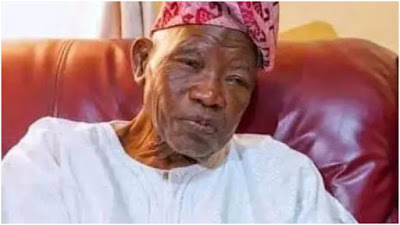 Deji Jakande, son of the first Civilian Governor of Lagos State, Alhaji Lateef Jakande, has recounted his father’s last moments before he died.

Jakande died at the age of 91 on Thursday.

He thanked God for the life his father lived, saying he was not sick before he died.

According to Deji, his father took his pap and crayfish and was still reading his newspapers without glasses.

“We had stopped visitors from going to him because of Covid-19 because he likes shaking people. Today, he was about to take his breakfast. Suddenly, he couldn’t breathe again. We called the doctor to come and examine him. That was between 10.30 am and 11.am,” he told the Nation.

He said many people have been calling, which included the Governor, the deputy governor, the party chairman and others.

“He will be buried tomorrow after Jumat Service before 4pm at the Vaults and Gardens, Ikoyi,” he said.

akande as governor of Lagos, laid the development foundation of the state.

He expanded educational facilities, built more schools and capped them all by establishing the Lagos State University, LASU.

He built hospitals in all local governments in the state.

He also expanded a yet to be matched record in building affordable housing for the people.