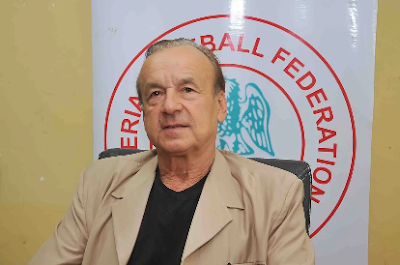 Head coach of the Super Eagles, Gernot Rohr, has hinted that he won’t invite new players for their upcoming 2021 Africa Cup of Nations qualifiers against Benin Republic and Lesotho.

Speaking in an interview on the team’s official YouTube page, Rohr debunked reports that some new players had been granted permission to play for Nigeria by FIFA.

He insisted he has good players in his squad and would not consider bringing in any new player at the moment.

“You can read so many names in the newspaper, but that’s not the best way to select the players. The best way to select the players is to scout them very well, and also to speak to them if there is motivation to come. If they want to come, they have to write a letter to FIFA that they want to switch from England or Germany or Austria to Nigeria and it’s not easy for them to make that choice,” Rohr said.

“But we have some players in view, one of them wrote a letter already. I saw a list the other day in the media which was fake news.

“So, for the moment, we have our players, and it is not the best moment to bring in new players when we only have one or two training sessions to prepare for a match.

“When you come into a team for the first time, you need a little time to adapt and to take your place in the group. I hope that we can find better players, but we already have good players.

“The best players, only the best players can come. We already have good ones, so if you want to come in, you need time to adapt, you cannot come on Tuesday and play with your new teammates on Wednesday.

“So, let’s work on it quietly and not publicly. We welcome players better than the ones we have, we have good players already, there is a big concurrence in the striking position now, so this is not the position to invite new players because we don’t have the time before these two last matches in the qualifiers.”

The Eagles are top of Group L with eight points from four matches.

The three-time African champions will play Benin away on March 22, before hosting Lesotho on March 30.