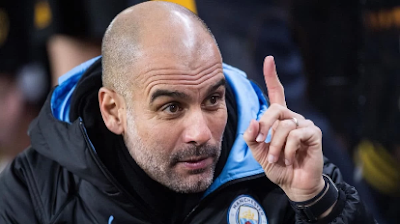 Manchester City boss, Pep Guardiola has challenged manager Hansi Flick and his Bayern Munich team to a ‘battle of the sextuples.’

Bayern beat Tigres to win the Club World Cup on Thursday, adding to five other titles they won in a single year.

This means that the Bundesliga giants became only the second side ever to win the sextuple, matching Guardiola’s legendary 2009 Barcelona team.

Reacting to the development, Guardiola who now manages Manchester City, congratulated Bayern Munich and the manager for equaling his record.

“But I would like to say to Hansi that you are the second team to win the six titles in a row!” He said in a video he post on Twitter.

“Before you, there was another team, Barcelona… so maybe I can call Messi and company and we can play for the seventh title? Tell me when and where and we will be there!”

Guardiola became Barcelona manager in 2008 and guided the team to the treble of La Liga, Copa del Rey and UEFA Champions League in his first season.

In 2011 he led Barcelona to another La Liga and Champions League double and was awarded the Catalan Parliament’s Gold Medal and FIFA World Coach of the Year.

He left the Catalan giants in 2012 after four years with 14 honours, which is a club record.