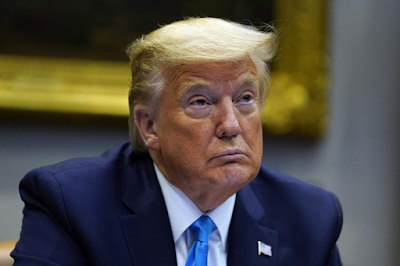 United States president, Donald Trump, has fired back at Meghan Markle and her husband, Prince Harry after the couple released a message in honour of the National Voter Registration Day, US Weekly reports.

The president then directed his remarks toward Harry, 36, and his decision to marry the former Suits actress, 39.

“I would say this, and she has probably heard that; I wish a lot of luck to Harry because he is going to need it,” Trump said.

Ahead of the president’s response, his former campaign manager, Corey Lewandowski, said, “Markle and Harry made Britain great again by leaving, I hope they do the same for us.”

Lewandowski comments came after the couple recorded a video urging U.S. citizens to vote in the upcoming 2020 presidential election in November. The speech was aired during an ABC special celebrating Time magazine’s list of the 100 most influential people of 2020.

Although neither Markle nor her husband directly told viewers to vote Trump out of office, they pleaded with voters to make their voices heard this November.

“Every four years we are told the same thing: that this is the most important election of our lifetime. But this one is. When we vote, our values are put into action and our voices are heard. Your voice is a reminder that you matter because you do and you deserve to be heard,” Markle said while sitting beside her husband in the backyard of their new home in Montecito, California.

Although the former military pilot cannot vote in the election because he is a British citizen, he echoed his American wife’s sentiments, as Trump faces off against former vice president, Joe Biden.

“When the bad outweighs the good, for many, whether we realize it or not, it erodes our ability to have compassion and our ability to put ourself in someone else’s shoes. Because when one person buys into negativity online, the effects are felt exponentially. It’s time to not only reflect but act,” Prince Harry said.

The prince has never voted in the U.K. as members of the royal family are expected to stay politically neutral but he reminded Americans to always reject “hate speech, misinformation and online negativity.”