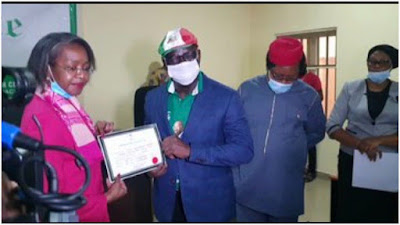 Governor Obaseki was re-elected on Sunday after scoring the highest number of votes as mandated by the law.

According to the results collated in 18 LGAs, Governor Obaseki who was the candidate of the Peoples Democratic Party, PDP, won in 15 Local Government Areas of the State.

He polled a total of 307,955 to defeat his closest rival, Pastor Osagie Ize-Iyamu of the All Progressives Congress (APC) who garnered 223,619 votes.

Obaseki will be sworn in for a second term in office on November 12, 2020.