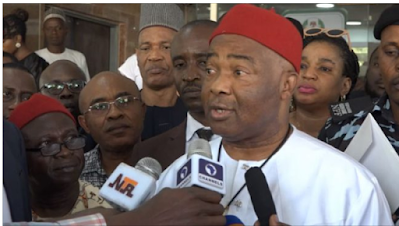 Hope Uzodinma, governor of Imo state, says it is the “height of ignorance” for people to describe him as “supreme court governor”.

Speaking when he featured during a Channels TV programme, the governor said those describing him by that tag lack understanding of how the court works.

In January, the apex court declared Uzodinma as governor after ruling that Emeka Ihedioha, who was announced winner of the state governorship poll, was not duly elected.

Some, however, faulted the court’s decision, and started calling Uzodinma “supreme court governor”.

During the TV programme on Friday night, the anchor asked him if he was unsettled by the tag, to which he responded that his emergence followed due process.

He said he was not the first person to have been declared winner of an election by the court, wondering why his case should be different.

“It is the height of ignorance because I don’t know what they mean by that,” the governor said when asked.

“There is a reason for the supreme court. In the doctrine and principle of democracy, the law expected that there would be grievances and malpractices in the electoral process.

“When this happens, the only legitimate right you have is to seek redress at the court. And of course, the court determines.

“Remember that this is not the first time, so many elections had held where the candidates went to court and they got justice. So, why will mine be different?”

He said the Independent National Electoral Commission (INEC) failed to count for the votes of some persons during the election.

The governor recently petitioned the National Judicial Council (NJC) and Abubakar Malami, attorney-general of the federation, over the tag.