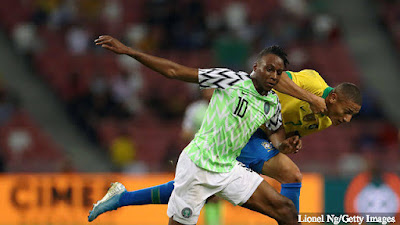 Glasgow Rangers midfielder Joe Aribo is a major doubt for Super Eagles’ international friendlies against Ivory Coast and Tunisia next month, after he suffered a setback during his recovery.

The 24-year-old has been out of action since he scored his first goal of the season in Rangers’ victory over St. Johnstone, before he picked up a calf injury in the encounter.

Rangers manager, Steven Gerrard, confirmed the Nigerian would be out of action for an extended period during a press conference on Friday.

“Joe Aribo has had a setback with an ankle strain and will be missing for four to six weeks, Gerrard said.

“It’s a big blow with Joe, he is a player we rate highly, it is actually good news as it was a situation that could have required surgery, but he doesn’t, and we hope he can be back in four weeks.

“It will be a blow, however, as he is a major talent.”

Aribo is set to miss Rangers’ clash against Dundee United, Motherwell and Hibs. He also faces a race against time to feature in the Old Firm derby on October 17.