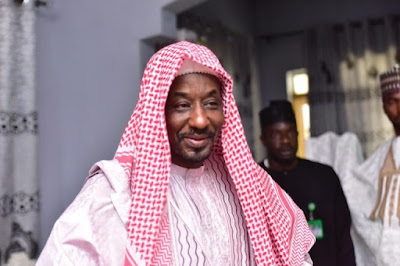 The Kano State Public Complaints and Anti-Corruption Commission has given Muhammad Sanusi II, former Emir of Kano, two days to respond to allegations of land racketeering against him.

The commission in March, asked Sanusi to appear before it for allegedly ordering the illegal sale of several hectares of land in the state.

The agency said the “proceeds of the sales remitted to the emirate council bank account can be traced to the companies of interest to His Highness”.

The charges will be filed against the former monarch soon, and that the legal processes are in the works.

In a letter dated September 8, the anti-graft agency said it was investigating “the management of pieces of land that were reserved as ‘GANDUN SARKI’ spread in many parts of the state” under the stewardship of the former emir.

It said the the allegations against Sanusi border on sections 22, 23 and 26 of the state law.

“Investigation revealed that all transactions for the sale of the landed properties belonging to the Emirate were done corruptly by the trio of Shehu Muhammad Dankadai (Sarkin Shanu), Sarki Abdullahi Ibrahim (Makaman Kano) and Mustapha Kawu Yahaya (Dan Isan Lapai) purportedly on behalf of Ado Bayero Royal City Trust Fund and allegedly on your instructions,” the letter read.

“Another issue that needs clarification from you is that at its 4th sitting dated the 8th June 2016, the Kano Emirate Council refused to approve the request to pay a foreign consultant (Messer Apple One Integrated Resources) the sum of N175,000,990.90 but you allegedly instructed the above mentioned trio and members of Ado Bayero Royal City Trust Fund to directly without even channeling the proceed from the site and services programme of Darmanawa Phase II to the Emirate Council account and the sum was given to Dan Isan Lapai by the company handling the project of City Scape Properties Ltd. based on your alleged instruction for the settlement of the said consultant and another N220 Million for an undisclosed entity.

“Similarly, on 16th December, 2016 the sum of N70, 0000,000 was deposited to the account of Harara Turnkey Project Ltd. which was subsequently transferred to Majeeda Farms Ltd. on the same day. The said company allegedly belonged to you and that it is being managed by your younger brother and Principal Private Secretary (PPS) in the person of Mujitaba Abba.

“Investigation further revealed that such entities afterward channeled the proceed back into your personal account No. 2666482899 at First Bank an act which contravened Sections 22 and 23 of the Kano State Public Complaints and Anti-Corruption Commission Law 2668 (as amended). For example, Sani Hamisu Umar transferred N91,303,000 to your account on 25th October, 2018 on 10 trenches. Also, on the 9th of November, 2018 transferred the sum of N2 1,500, 000 on 3 trenches to your account.

“This Commission has been waiting for your response to our invitation after the ruling vacating the Interim Order of the Federal High Court directing it to maintain status quo in relation to the invitation extended to you for clarification of these issues.

“The Commission therefore deemed it appropriate in the spirit of fair hearing to invite your attention to respond to the allegations raised on this letter and the surrounding circumstances, especially the relationship with the corporate and individuals entities involved.

“We expect your response within a reasonable time not later than two working days from the time of the service of this letter.”