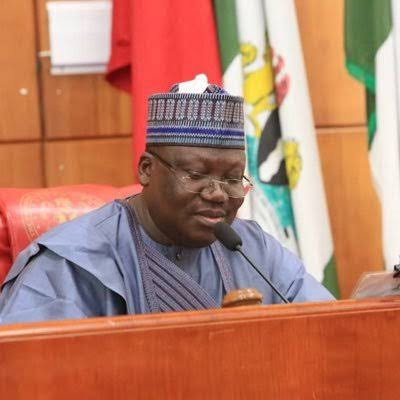 For the African Continental Free Trade Agreement (AfCTA) to yield intended results, it must be backed by requisite legal frameworks, right policies, and robust implementation.

This is according to the President of the Senate, Ahmad Lawan.

Lawan made the assertion when he received a visiting delegation from the African Continental Free Trade Area, led by its newly elected Secretary-General, Wamkele Keabetswe Mene, on Tuesday in Abuja.

The Senate President who was represented by the Deputy Senate Leader, Ajayi Boroffice, said the intent behind Nigeria’s decision to sign the agreement on July 7th, 2019, during the 12th Extra-Ordinary Summit of Heads of State and Government, in Niamey, was to benefit Africans on the continent and outside it.

According to Boroffice, aside from facing the challenges of unemployment, and underemployment, which has been a trigger for both regular and irregular migration, the economies of African countries have been characterized by low productivity, reduced efficiency, and the problem of limited resources.

He, therefore, described the African Continental Free Trade Agreement as “a step in the right direction for the growth of African economies, through limited restrictions, leading to the stimulation of trade, commerce, and industry.”

“In signing the African Continental Free Trade Agreement (AfCFTA), and depositing the instrument with the African Union Commission, our countries made a statement on the determination of our collective economic fate. This fate is in our hands, through requisite legal frameworks, right policies, and robust implementation.

“The initial momentum from the signing of the agreement needs to be continued, for a greater continental impact, to benefit Africans, both on the continent and outside it”, he said.

The Senate President added that “the Nigerian Office for Trade Negotiations, which is the agency of government, responsible for managing, coordinating, and leading all trade and trade-related negotiations, has the clear mandate of managing Nigeria’s side of the agreement.”

According to Boroffice, “Nigeria’s action in signing was not just evidence of our commitment to the spirit of Africa, but a sign of our trust in a unified economic growth. The multiple benefits of the arrangement are also not lost on us.”

“As the biggest market and economy on the continent, we have a strategic role to play in the evolution and stabilization of the African economy. We are ready to expand the possibilities through our status, with your confidence in us, and the demands of posterity,” the Deputy Senate Leader said.

Earlier, the Secretary-General of the African Continental Free Trade Area, Mr. Wamkele Mene, in his speech noted that the success of the trade agreement was largely dependent on the measure of the benefit accruing to African countries.

“The AfCTA, if it benefits only the big countries in Africa, is not going to work”, Mene said.

According to him, the secretariat going forward would look up to Nigeria for guidance in coming up with policies and ways of implementing the content of the trade agreement to accommodate the interest of all African countries.