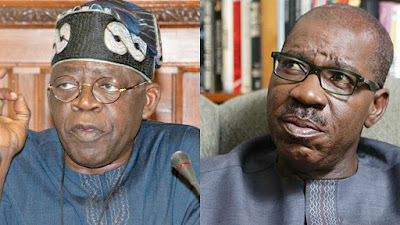 A video has surfaced that shows that Edo governor Godwin Obaseki is a man of contradictions when it comes to his relationship with APC National leader, Asiwaju Bola Ahmed Tinubu.

Just a few years ago, Obaseki was the toastmaster at a birthday colloquium for Bola Tinubu, where he spoke like a bootlicker, in his fawning address at the occasion.

Tinubu, he said has been an inspiration to him. He was the person, who inspired him to join politics.

Tinubu is his leader, he also said.

And he told the gathering as well that Tinubu is one of the most strategic politicians who has defined the progressive politics in the country.

Contrast this with Obaseki’s position today, when he spoke by proxy to savage the same Tinubu, who called on Edo people to reject his second coming:

“Tinubu knows clearly that come September 19, when godfatherism would have been dismantled in Edo State, the people of Lagos may just have found the recipe and formula for removing the chokehold placed on their collective destinies for decades by Tinubu, hence the inciting television broadcast”.