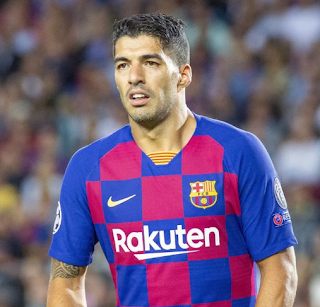 Barcelona striker, Luis Suarez, on Wednesday said his final goodbyes to his team-mates ahead of his free transfer to Atletico Madrid.

Suarez was spotted crying in his car after he attended his last training session with Barcelona, Evening Standard reports.

The 33-year-old looked visibly emotional as he left Barcelona’s Ciutat Desportiva Joan Gamper training complex, holding up a hand to bid farewell as he drove off in his black Range Rover Sport.

Suarez is to join Atletico Madrid this week after terminating his Barcelona contract following crunch talks with the club’s representatives.

The Uruguay international spent six years at Barcelona following his arrival from Liverpool.

Suarez played a total of 283 games for the Blaugrana, scoring 198 goals and providing 109 assists.

The forward is likely to say goodbye in a press conference tomorrow at noon.

Suarez is one of several players to leave Barcelona this summer, following the departure of Ivan Rakitic, Arturo Vidal, Nelson Semedo and Arthur Melo.