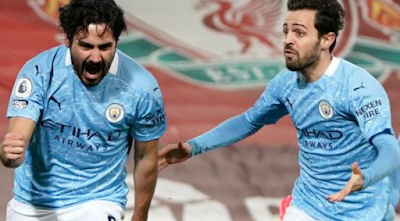 Manchester City ended an 18-year wait to beat Liverpool at Anfield in style with a 4-1 win on Sunday to take a firm grip on the Premier League title race.

Ilkay Gundogan scored twice and missed a penalty as Pep Guardiola’s men moved five points clear of Manchester United, with a game in hand to come, at the top of the table.

A third consecutive home defeat leaves Liverpool 10 points off the top in fourth, having also played a game more than City.

Raheem Sterling and the outstanding Phil Foden were also on target for the visitors on a day to forget for Liverpool goalkeeper Alisson Becker, who was at fault for three of City’s goals.

After a club record-breaking run of 68 league games unbeaten at Anfield, Liverpool have now lost three consecutive home league games for the first time since 1963.

The margin of defeat was also the Reds’ biggest in the Premier League era as City landed a knockout blow to their title defence.

City’s club record run of 14 consecutive wins, 10 of which have come in the league, has seen them pull away from the pack at the top of the table from what seemed a wide-open title race just a few weeks ago.

That run is reminiscent of the City and Liverpool sides at their best over the past three seasons as they have ran up record points tallies in combining to win the last three league titles.

However, Liverpool appear to have run out of gas in an injury-hit campaign after ending a 30-year wait to win a league title by taking City’s crown as champions last season.

The Liverpool backline had been rarely tested until Sterling ran at them eight minutes before the break and the former Reds winger was upended by Fabinho.

Kevin De Bruyne missed a penalty for City when the sides met earlier in the season, while Riyad Mahrez blazed over from the spot in a 0-0 draw at Anfield in 2018 – the only time Guardiola had previously avoided defeat away to Liverpool as City manager.

The Catalan threw his arms up in disgust as Gundogan also failed to hit the target as his spot-kick flew well over the bar.

Not for the first time in City’s fine run, Guardiola started without a recognised striker, but a half-time tinkering of his formation to push Bernardo Silva closer to Foden in attack paid immediate dividends.

Another purposeful burst from Sterling fed Foden and after his low shot was saved by Alisson, Gundogan this time made no mistake on the rebound to score his seventh goal in 11 league games.

City had conceded just twice in their 13 league games, thanks in large part to the formidable partnership of Ruben Dias and John Stones in central defence.

In contrast, Liverpool had not scored at Anfield in over six hours until a rare error from Dias handed the champions a lifeline just after the hour mark.

The Portuguese’s attempted clearance was blocked by Mohamed Salah, who was then pulled down by Dias.

Salah has not missed a penalty for Liverpool since 2017 and made no mistake when he fired straight down the middle.

But Liverpool could not build on that reprieve as the normally dependable Alisson gifted away two goals in comical fashion.

The Brazilian cleared the ball straight to Foden, who wriggled clear inside the area before squaring for Gundogan to tap home his second off the underside of the bar.

Seconds later, Alisson’s confidence seemed to have gone as another wayward attempted clearance picked out a City player as this time Silva crossed for Sterling to score his first goal at Anfield since leaving Liverpool six years ago.

Foden then completed the rout and an outstanding personal performance with a blistering shot seven minutes from time that also escaped Alisson’s grasp.