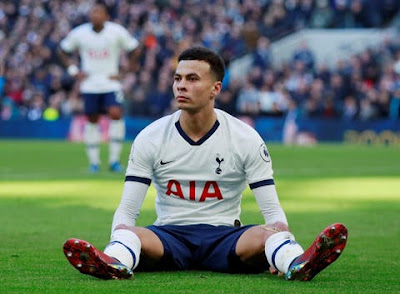 Tottenham boss Jose Mourinho expects Dele Alli still to be at the Premier League club when the transfer window shuts next month, confirming he is in the squad for this week’s Europa League fixture.

The England midfielder, who has been left out of the past two games, has been linked with a loan move to Paris Saint-Germain in recent days.

But he will travel to North Macedonia for the Europa League third-round qualifying clash against Shkendija on Thursday.

After being subbed at half-time during the opening game of the season against Everton, Alli was not in the squad for the matches against Lokomotiv Plovdiv or Southampton.

But he had been due to start against Leyton Orient in the League Cup on Tuesday before the match was called off following a coronavirus outbreak at the League Two club.

Speaking about Alli’s inclusion in the squad for the Shkendija trip, Mourinho said: “I always told that he will have his opportunities. I always told that it is no problem at all to have him and, like every other player, performances are important.

Alli’s place in the Spurs team has been put under even more threat by the arrival of Gareth Bale on loan from Real Madrid for the rest of the season potentially to form an exciting front three alongside Harry Kane and Son Heung-min.

Kane and Son combined for all five of Tottenham’s goals in a 5-2 win at Southampton, to bounce back from a 1-0 home defeat to Everton.