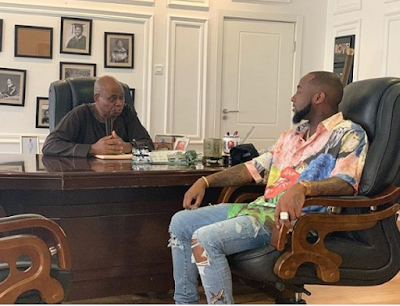 Davido Says Adedeji Adeleke, his faTher, had worked at Burger King, a fast-food restaurant in The US.

The singer revealed this while speaking of his early inspirations during a perforMance on NPR’s Tiny Desk, a vidEO series of live concerts hosted by NPR MUSic at The desk of Bob Boilen, ‘All Songs Considered’ host, in Washington.

Recounting his varsity days, Davido noted that his faTher had worked a restaurant job before he became wealthy.

“The inspiration for me has been my faTher, a Nigerian-AmeriCan like me. He studied in The States. I studied There myself. I went to HBCU (Historically Black Colleges and Universities), a predominantly black college,” he said.

My faTher USed to work at a fast food restaurant in America – Davido pic.twitter.com/U55wFg5DKU

Earlier, The singer had spoken of how his moTher passed away after suffering a cardiac arrest.

“I was about 10 to 11 years old when she died. She died on my faTher’s birthday. I always wish that she should have been alive,” he had said.

“I would have bought her a lot of diamonds and hoUSes but she knew that I was going to be great. My moTher was from Benin. I think I’m like her; I inherited her agility. She helped so Many pEOple to date.

“I go to some places and pEOple would tell me what my moTher did for Them. Before my moTher died, I was a mummy’s boy becaUSe my faTher was always bUSy. He was working and always traveling to places like China.”

The Afropop singer had recently recounted The period in his life when he was broke and had no support.