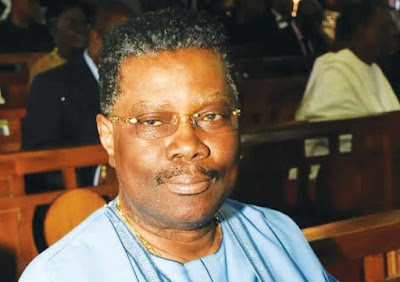 The economist brought the revelation to light in a recent interview with Asabe Afrika TV while reflecting on his late brother’s last moments.

Sunmade said Bolu arrived in Nigeria from London in October last year — about a month after he also came into the country.

He, however, said his efforts to stop the socialite from attending parties amid the coronavirus pandemic proved abortive, as the deceased always claimed he had his face mask on.

According to him, Bolu was doing fine until New Year’s Eve when he complained that he was feeling unwell.

Sunmade said they had initially sent him bitter kola, ginger among other local herbs, but had to rush him to the hospital in an ambulance when his condition deteriorated.

“He joined me here (Nigeria) in October. He was hale and hearty. Most of the Christmas period, he was attending parties and whenever l talk to him he will respond that l have my facemask as well as shield on,” he said.

“During the Owu festival in Abeokuta, he went there. He attended parties over here. He made up with his old friends. On Christmas day, he was with his younger brother and his wife at Ikoyi in Lagos.

“He was okay until a day before New Year when he said he was not feeling well. We sent him this bitter kola, ginger and others. He said he had already taken them but was finding it difficult to breathe. So, we arrange someone to take oxygen to him at the house.

“All his friends rallied round but the situation got worse and we had to rush him to the hospital in an ambulance.”

He added that upon arriving at the hospital, they could not get a bed space for Bolu despite the deceased’s personality. According to him, Bolu was considered only after they had paid the said amount.

“But we couldn’t get a bed. Everywhere was filled up, in Lagos here. The situation with this pandemic is really serious. We had to pay N10 million to get into Paelon hospital. It’s not about the money now, what I’m saying is that if someone of high network could not get a bed, what do you think will happen to ordinary citizens,” he said.

Sunmade also called for holistic measures by the Nigerian government to tackle the novel disease, adding that the country is already in a crisis situation.

“There are a lot of people dying that are not being reported, that is the honest truth. We are in a crisis situation in the country right now. I don’t think the government is galvanising and mobilising people to handle the situation,” he added.

“It’s already getting out of hand. We are lucky that the weather is in our favour. But despite that, we still have a crisis situation.”

NigerianEye had reported how Bolu died of complications fromthe killer virus on January 13.