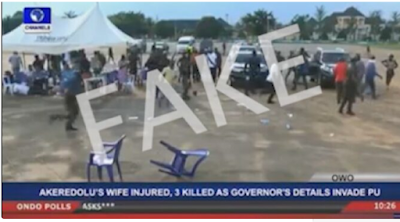 A video circulating on social media claiming that violence broke out at Rotimi Akeredolu’s polling unit in the ongoing Ondo election is fake.

Akeredolu, who is the incumbent governor, is seeking reelection on the platform of the All Progressives Congress (APC).

The video claims that three people have been killed and Betty Anyanwu-Akeredolu, wife of the governor, injured.

TheCable reports that the video was from 2018 when the Peoples Democratic Party (PDP) held its primary for the Delta house of representatives seat.

The voting exercise to elect a new governor in the state is ongoing.

Here is the original video

Debunking claims of being injured, the wife of the governor, said: “That tells you how desperate people can be in politics or our political landscape”.

“I am here in the ambience of my country home and somebody is there doctoring video that I was injured.

“Were you the one that injured me? Such desperation will not do any good for them.

“The detractors want to damage the exercise, to distort information and put one on a bad light. It is all false.”