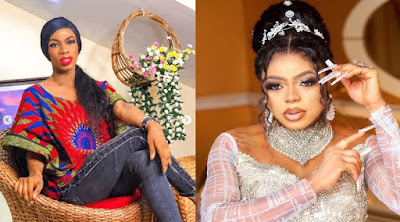 James Brown, a Nigerian cross-dresser, says he remains unbreakable after his Instagram page was deactivated amid an ongoing face-off with Bobrisky, his colleague.

The drama started on Friday when Brown took to his Instagram page to allege death threats from Bobrisky.

But hours after putting out the video, the Facebook-owned platform deactivated his page — a development that has continued to generate mixed reactions.

In another video shared on his YouTube page on Saturday, Brown again called out Bobrisky, accusing him of orchestrating the deactivation of his Instagram page.

He also revealed that Bobrisky called him last year over his manner of dressing, wondering why the “male Barbie doll” considers him a “threat.”

“Let me clear this quickly, l used to like Bobrisky because she reaches out to others. But l don’t know what she’s up to at the moment.”

He denied Bobrisky’s claim that he was copying content from his page, vowing to resist attempts by him to dictate how he goes about cross-dressing.

“This cross-dressing of a thing isn’t meant for one person. I thought she was even trying to check on me only to hear her threatening to deal with me and even kill me.”

Bobrisky, however, dismissed claims that he was behind the deactivation of Brown’s IG page while cursing those pushing such narrative.

”All of you must tell me you love me o! As for u James brown, I love you regardless you are just a baby. Mama still love you. Secondly I need to clear d air, if I ever know about anyone account deleted let God judge me and repay me with evil. I have d purest heart ever !!!!! I can fight with you but not to wish you bad,” he said in a now-deleted post.

“Ever since have joined IG, have never reported anybody page before. Those of you accusing me continue, very soon they will accuse of you of what you know nothing about.”

The development comes about two months after Brown assured Bobrisky no one was fighting for his throne as the leading cross-dresser in Nigeria.