Bazefor9ja.Com
Home News Kankara abduction: Nowhere is safe if students can be abducted from Buhari’s... 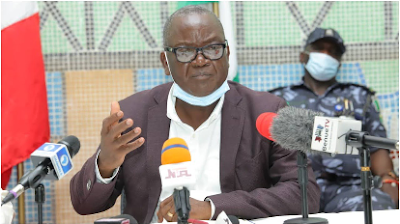 Governor Samuel Ortom of Benue State, on Thursday, reacted to the abduction of students from Katsina State.

Ortom said the abduction of Government Science Secondary School in Kankara Local Government Area was an indication that nowhere is safe in Nigeria, NAN reports.

The terrorist group had claimed the students were abducted to encourage Islam and discourage western education.

The abduction occurred at a time when President Muhammadu Buhari was in his hometown, Daura on a private visit.

However, Ortom condemned the abduction of the students.

The governor spoke during his visit to the Maximum Security Custodian Centre, MSCC, in Makurdi, the state capital.

According to Ortom: “If hundreds of students could be abducted in Katsina, the home state of the president, no place is safe again.”

He also directed the closure of all boarding schools across the state.

The governor ordered the state’s Commissioner for Education to complete necessary steps to close all boarding schools in Benue as a preventive measure against the abduction of students.