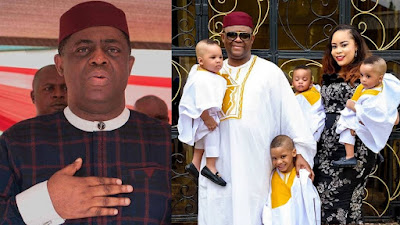 IThe 30-seconds clip – shared by Sahara Reporters – shows the Peoples Democratic Party chieftain berating Precious, asking her what her problem was. He walks towards the 31-year-old, and while he was getting closer, the actress tells him “you have been abusing me since,” but before she finishes her statement, Fani-Kayode, apparently noticing she was recording the exchange, attempted to snatch the device from her.

“Stop recording. Who the hell are you?,” he said to her.

The 59-year-old former aviation minister dared the model and Nollywood actress – whom they share four children together – to go ahead and report “anything you like”.

Watch the video below.

Recall that in August, Fani-kayode attacked Eyo Charles, a journalist with Daily Trust, for asking him a question during a press conference in Calabar, Cross River State.

Apart from describing Charles as “stupid”, FFK used other derogatory words on the journalist, drawing criticisms from far and near.

The former minister eventually bowed to public pressure and apologised for his conduct.