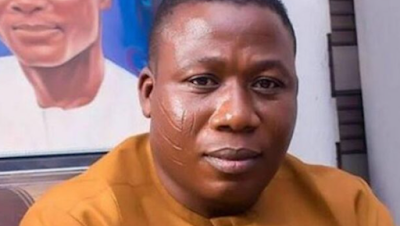 Sunday Igboho has reiterated his position that Fulani herdsmen must leave Oyo State.

The Yoruba activist made the declaration to a team of soldiers and policemen.

In a video obtained on Saturday, Igboho told the security agents he would not back down on his demand.

“I don’t want any herdsman in the whole land. C’est fini! (it is finished)”, he asserted.

Igboho might be arrested anytime soon, going by orders given to the police by the federal and Oyo governments.

On January 15, he ordered Fulanis in Igangan, a community in Ibarapa North Local Government Area, to leave the State.

Igboho blamed them for the spate of murders and abductions in recent months. He stormed the area again on Friday.

His comments and actions have generated diverse reactions across the country.

Reacting to the arrest order, Adewale Giwa, Senior Pastor of Awaiting The Second Coming of Christ Ministry, called for restraint.

The cleric, who said Igboho’s arrest “will hasten the disintegration of Nigeria”, accused President Muhammadu Buhari of shielding the Fulani “while they continue to kill our people”.

“Why didn’t IGP arrest Miyetti Allah and their representatives in Abuja? Sunday Igboho is doing the right thing for the entire Yoruba nation”, Giwa added.

The former presidential aide advised the federal government to thread softly, noting that Igboho has the full support of the Yoruba.

“When the Northern youths demanded that Igbos should leave the North, no one was arrested.