Ondo Governorship Debate 2020: Akeredolu and Jegege in war of words 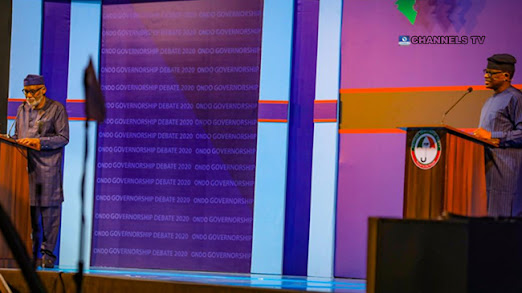 Governor of Ondo state, said it was wrong for administrations before him to create three state-owned universities.

Akeredolu stated this during the governorship debate organized by Channels TV ahead of the October 10 election in Ondo state.

The governor also confirmed that he will not reduce tuition fees from over N100,000 to the N25,000 that was in place when he came into power.

He said the administration of Olusegun Mimiko which his opponent Eyitayo Jegede, served as the Attorney-General and Commissioner for Justice, bite off more than they could chew.

Governor Would you be prepared to reduce tuition fees to what operated before you came in, at least for university students?, Eyitayo asks Akeredolu

Akeredolu responded: “Well, it is something I believe this state can not do. I am not prepared to do it because we have responsibilities and those responsibilities were put on us by the government you served in, this state has no business having three universities at the same time. If you are allowing 25 thousand when you have two universities when you now have three it is a whole lot of responsibility and I believe quite strongly for that matter that we are chewing more than what we can bite or we are biting more than what we can chew and for me, it is for the good of these people, I mean good for our people that our student will go to the university and have a proper university education. We are giving them proper education and that’s why today Adekunle Ajasin that you are talking about is the best state university in Nigeria.”

On his part, Akeredolu said: “Tayo, have you not seen the impact of good governance in Ondo?”

“Unfortunately, I have not seen, I will do more than you sir,” the PDP candidate replied.

However, earlier in the debate, Jegede said he plans to increase government revenue without increasing taxes.

He said residents would be encouraged and would pay their tax joyfully.

Jegede said he plans to improve Bitumen exploration through public-private partnerships. He noted that Cocoa output has failed to improve in the state.

But Akeredolu said his administration improved bitumen exploration in the whole of Nigeria, says Jegede failed to give him credit for that.

Jegede responded by saying all Akeredolu said were lies. Akeredolu insisted that the figures are out there to verify, saying he pitied Jegede.

Akeredolu said his government has done well in the areas of infrastructural development and basic amenities for people of the oil-producing communities, he mentioned power, portable water, and street-lightening to mention a few.

However, Jegede disagreed with Akeredolu on the purported achievements of his administration.

On his part, Akeredolu said the people are being cared for, especially the vulnerable group who are enjoying free medical care among others.

On pension, Akeredolu blamed the two immediate past governors of Ondo State. He alleged that the former governors did not give the pensioners any sense of belonging.

On calls to End SARS

Akeredolu said personnel should be retrained to curb excesses. For Jegede, SARS must operate within the ambit of the law.