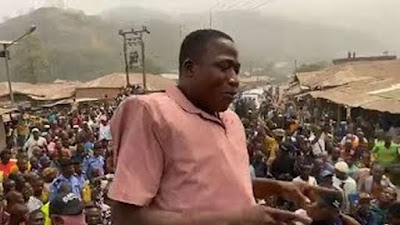 A Yoruba activist, Sunday Adeyemo Igboho has revealed how Yoruba traditional rulers and leaders raised their voices against the threat of the Nigeria police to get him arrested.

The presidency had ordered the arrest of Igboho after he stormed Igangan to effect the eviction of Fulani herdsmen from the Ibarapa community in Oyo State.

Houses and cars belonging to the Fulani leaders were said to have been set on fire by some youths at the time Igboho visited the community.

Though Igboho said he did not attack anybody during his visit to Igangan, the Inspector General of Police, Mohammed Adamu, was said to have directed that he be arrested and brought to Abuja for prosecution.

But, many Yoruba leaders rose up to warn the Federal Government against Igboho’s arrest, saying it may heighten the already tensed situation.

In a video on Sunday, Igboho appreciated the Alaafin of Oyo, Oba Lamidi Adeyemi; the Ooni of Ife, Oba Adeyeye Ogunwusi; Former Aviation Minister, Femi Fani-Kayode; Publisher of Ovation Magazine, Dele Momodu; the Aare-Ona Kakanfo, Gani Adams and others for their supports.

Addressing a group of youths on Sunday, Igboho said: “I swear to God, our fathers in Yoruba land are not happy over the state of insecurity in the region. But now, they are speaking up. You can see the prominent Yorubas that have raised their voices, saying Buhari if you try it! On radio, they are sounding warnings that if you arrest Igboho, there will be war; even Facebook did not rest. Look at our father like Dele Momodu. Look at Fani-Kayode as he raised his voice.

“These (Fulani) people continue killing our people and raping our sisters. Enough is enough!

“Look at the Alaafin of Oyo’s letter to Buhari. He has written another one today.

“The Ooni of Ife is angry on the throne of his fathers. He said you can’t be terrorising my Odu’a children while I keep quiet. He said he will no longer keep quiet. I swear to God he said that.

“He didn’t say it by words of his words only. He picked up his phone and called Buhari, telling him that enough is enough of the killings, kidnapping and banditry,” Sunday Igboho told his supporters.