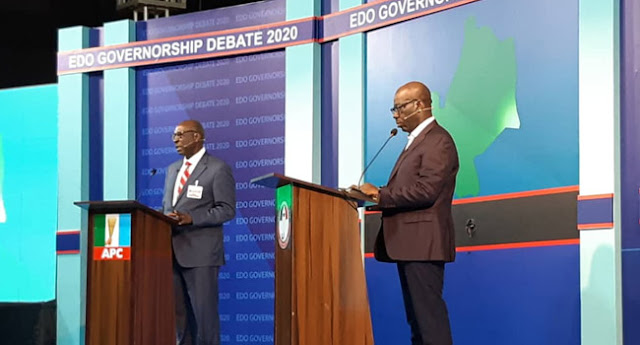 As we edge closer to the 2020 Edo State Governorship Election, the two major contenders in the poll met physically on Sunday evening to share their vision with the people of the state.

The All Progressives Congress candidate, Osagie Ize-Iyamu; and the state governor, Godwin Obaseki, who is seeking re-election on the platform of the Peoples Democratic Party, had earlier attended a virtual debate organised by the BBC Pidgin but the two juggernauts stood face-to-face before a live audience on Sunday evening during the Channels Television Edo Governorship Debate.

The debate organised by the television station and its partners comes about a week to the September 19, 2020 governorship election.

At the debate monitored by NigerianEye, the moderator, Seun Okinbaloye of Channels TV, asked the candidates their plans to revive the state economy, especially along the lines of job creation and industrialisation.

According to the moderator, the Human Development Index of the state in 2008 was 0.622 per cent and Edo State stands at 12th out of 36 states. Also, in 2019, Edo State has a poverty headcount level of sixth out of the 36 states of the federation.

Responding, Obaseki said, “In terms of human capacity and employment, that is one area we believe we have accomplished quite a lot. On the onset, I promised I will raise a minimum of 200,000 jobs within a minimum of a four-year period. And just before COVID-19 pandemic hit, we had created directed and indirect jobs for Edo people as much as 157,000.

“And where did the jobs come from? They came from the way the government decided to address the economy. The government role is creating an enabling environment for people to come and invest so that the economy can thrive.”

But the APC candidate disagreed with the statistics stated by the governor, saying he falsified the data.

Ize-Iyamu said, “Well, it is sad when the government that should be accurate with figures begins to falsify figures. If it is true that we have been able to have the number of jobs that the Edo State governor claims, our IGR (internally generated revenue) will not be where it is; there will be a significant leap but I can tell you, and they know, it has stagnated.

“I hope the governor is not going to mistake the appointments he is making now as jobs because I know that in the past one month, he has appointed over 200 people as SSAs (senior special assistants) on social media and the rest of them. Those are not jobs.

“So, when you are talking about jobs, where are the jobs, who did you give them to? It is sad when government that should be accurate with fact begins to feed our agencies with bogus statistics in an attempt to give an impression that we are doing well when we are not doing well.”

Obaseki in his reaction noted that the data he gave was verifiable and was based on a survey conducted by the National Bureau of Statistics, saying, “You can’t just come to a debate and mouth figures forgetting that everything you say can be googled. When you talk in general terms, understand that people can just google and find out the facts.”

But Ize-Iyamu maintained, “I think that in the past four years, the economy of Edo has been mismanaged, has been plundered and all the huge amounts that we receive at the inception of this administration has practically left our state without any serious project to show for it.

“We had the opportunity to diversify our economy. The governor made what I might call a very lame attempt and he failed completely and we are in a very sorry state. During Christmas for example, people were going to Abakaliki to bring rice, they were going to Kebbi to bring rice.”

Obaseki had dumped the APC for the PDP following his disqualification from participating in the APC primary that produced Ize-Iyamu as the flag-bearer of the party for the poll. The APC had alleged that Obaseki’s disqualification bordered on discrepancies in his certificates.

Asked to comment on the matter, Obaseki said, “It is very ironic that someone who has no certificate can stand up and comment on someone whose certificate was issued by the premier university in Nigeria. That is a very sad situation that we have found ourselves in as a country.

“I don’t know what has happened but for the University of Ibadan, the standard is still very high and they have come out to say that I graduated from that university. How else do you want to make that clear?

The APC candidate had also been accused of pouring acid on a fellow student when he was an undergraduate at the University of Benin. Ize-Iyamu was also reportedly expelled from the university.

Asked to comment on the issue, Ize-Iyamu said, “I graduated from the University of Benin. I was very active in the students’ union and my records are clear. People have alleged that when I was in school, I did that but I think they should go to the university authorities and find out exactly what was the offence. If you do something very criminal, the university cannot even handle it. And I am proud that throughout my stay, I was not engaged in any criminal matter.”

Facing his rival, the APC candidate fired, “We are not doubting whether you went to the university or not, that is not the issue. The issue is, you failed by your own records, you failed school cert(ificate), you had three credits, no English, no Maths, even to enter A’ Level would have been difficult. And if you had A Level, why is it that you’ve not been able to present the A Level? Where is the result? That is a moral question. A lot of people are looking up to you as a governor and as a leader.

“The question is that you failed your A Level and that is why you were disqualified and your disqualification arose from information provided by the PDP, your present party, because the PDP, when I was contesting against you (in 2016) said you have no results. Why have you not answered the question? Where are your results?”

Expectations rise daily as the D-day approaches as to who will win the September 19 poll in Edo.