VIDEO: Civilians are useless bastards, we will flog them – Nigerian Army soldiers 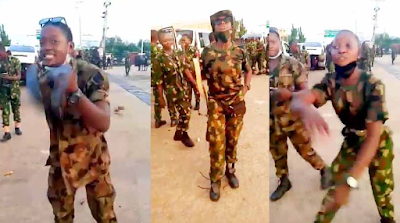 A video trending online shows the moment Some young female soldiers described civilians as useless and hopeless people.
In the 30-second video, the new recruits were asked what they think about civilians and they took turns to embarrass them.
The first soldier who spoke was heard saying the worst thing on earth is to be a civilian, and advised that they go join the military. While she was talking, another came on the camera threatening to flog them.
The person behind the camera then moved to another female soldier, who then said people who are not in the military are useless and hopeless, warning that they should not dare cross her lane.