VIDEO: Daddy Freeze responds to Pastor Ibiyeomie – “He wants to kill me” 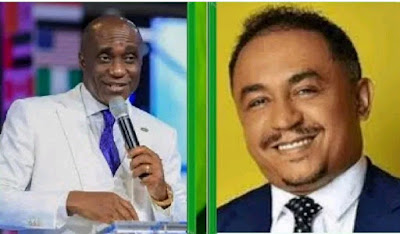 Critic and On-Air Personality, Daddy Freeze has broken his silence and called on the police and other security agencies to hold Pastor David Ibiyeomie, founder of Salvation Ministries, in Port Harcourt, responsible should anything happens to his life.

Ibiyeomie had in a viral video on Sunday attacked Daddy Freeze, calling him a bastard for daring to challenge his father in the Lord, Bishop David Oyedepo.

He threatened to kill him if he should dare speak ill against Oyedepo again. According to him, “The day Daddy Freeze insults Oyedepo, I will deal with him and arrest him. Who gave birth to you? Do you have a father? Show us his picture.

“Oyedepo will not talk but I can’t be alive and you insult my father. I curse the day you were born. I will tear you into pieces you bastard. He is insulting him because he has no father.

“You can never insult a father if you have one, be warned. A man whose wife left him, has no good job, will be insulting my father and people will be laughing online. I will never be alive to see such and do nothing again.”

Daddy Freeze, however, on Monday evening replied Ibiyeomie, saying that even with a gun to his head, he would continue to preach the truth about Christ, the scriptures and Christianity.

He said he never insulted Oyedepo, but only drew his attention to Ephesians 5:21 after Oyedepo quoted verse 22 of the same chapter on submission of the woman to her husband at home.

“I found it very devastating that just to get at me, Pastor Ibiyeomie, would drag the whole Somali nation, I am very proud to associate with Somalians because they are very beautiful people. Beautiful African people like you and I. It is hate speech to undermine them with derogatory words ‘Is he not just a Somalian? To all my fans and followers in Somalia, I love you all and proud to be associated with you, even though by birth I am not a Somalian; my mum is European, my father is Yoruba.”

According to Daddy Freeze, in a 10 minutes video on Youtube, “I will need to draw the attention of the public and the law enforcement to the threat of life that was issued to me in that video. Pastor Ibiyeomie, I don’t know if you realise that threat to life is a criminal offence and let it be on the record that you threatened my life.

“Is this how Nigeria is going to accept this? if anything happens to me, I hope you know who to hold responsible? This has been on social media space for the past 24 hours now, I am yet to hear anything from the police, what happened to our laws on hate speech, racism, discriminatory statements, threat to life which is actually criminal? ”

“Everyday we shout for freedom of speech, how can our dreams be shattered with threats of death from the ones we expect to guide our spiritual lives? Even with a gun to my head, I will continue to preach the word of God and debunk errors with the Scriptures.”

Daddy Freeze also castigated Ibiyeomie for making derogatory remarks about the broadcast industry, saying “Pastor Ibiyeomie, you went all again to undermine the noble profession of broadcasting, I am a proud broadcaster for the past 25 years, I have dedicated my life to it, you demean it to such a great extent, such a glorious profession that disseminate important information.

“Are we going to make broadcasters feel bad because of how little money is there? Maybe broadcasters should start collecting offering too that it will make you feel that someone of your calibre is talking to you. I think you should apologise to every journalist and broadcasters for undermining our world.”

Daddy Freeze described Ibiyeomie as a racist for calling him half-cast and demanded an apology.

“Are you aware that the word ‘half cast’ is racism? The world is fighting against racism and it brings tears to my eyes that a black man will refer to a fellow black man at a time people are crying that ‘black lives matters,’ as a half cast. Hate speech is criminal, it is derogatory and I ask that you should apologise for it,” he said.

He continued: “You say I am not my father’s son, I put it to you to prove who my real father is because with that verbal construct, you have insulted the integrity of my mother who is a professor of law.