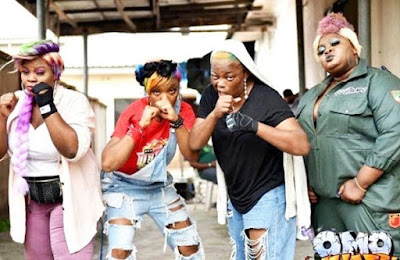 Funke Akindele-Bello, a Nigerian actress, has put out ‘Askamaya Anthem’, a new rap song, featuring Chioma Akpotha, Bimbo Thomas, and Eniola Badmus, three of her colleagues in the film industry.

The song, which is accompanied by street visuals, surprisingly sees the four movie stars delivering their powerful rap lines in both the Igbo and Yoruba languages.

‘Askamaya Anthem’ comes as the official soundtrack for ‘Omo Ghetto: The Saga’, a movie scheduled to debut on December 25.

The song, which unites hip hop and Afrobeat, calls for everyone who listens to step back and stand tall.

‘Omo Ghetto: The Saga’, the movie for which the song was made, follows the story of Lefty (Funke Akindele) and her friends Nikky (Bimbo Thomas), Busty (Eniola Badmus), and Chummy Choko (Chioma Akpotha) in ‘Askamaya Ghetto’.

The project is to come as Akindele’s first directorial collaboration with JJC Skillz, who doubles as her husband.

Watch the ‘Askamaya Anthem’ below: