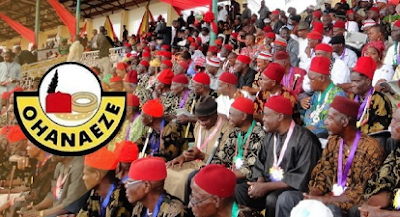 The Ohanaeze Ndigbo Worldwide has debunked allegations that the northerners in Southeast were given quit notice to vacate the region.

In a statement issued by the National Publicity Secretary, Chief Chiedozie Alex Ogbonnia, Ohanaeze said no one was chasing the Northerners from the region.

Ohanaeze warned the Northern and Southern elite to desist from inflammatory statements and activities that could incite ethno-religious violence.

“Leaders must restrain themselves from sharing the wrong narratives and perspectives. No one is driving Northerners away from the South.

“Ohanaeze calls on Northern leaders to join in the call against lawlessness and impunity by the few who do not represent the majority.

“Surely, no upright and well-meaning citizens will dispute the imperative of having law-abiding citizens who pursue their vocations without harming others.

“We declare that our people demand the observance of due process by all groups. We deplore rash and unlawful retaliatory actions,” the statement read.

The group, however, condemned the activities of herdsmen instigating crisis in the region and many other parts of the country.