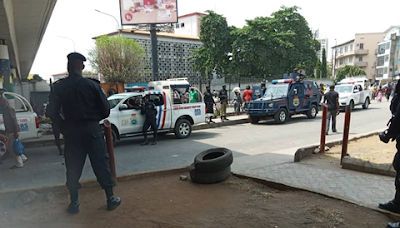 The Lagos State Police Command, on Thursday, said it arrested six suspected hoodlums responsible for the unrest in the Obalende area of the state.

It was earlier reported that gunshots were heard this morning when two rival transport unions –National Union of Road Transport Workers and the Road Transport Employers’ Association Of Nigeria –clashed in Obalende.

The development caused chaos in the ever-busy area as motorists and commuters scampered to safety.

However, police spokesperson in the state, Muyiwa Adejobi, in a statement hours after the incident, said normalcy has been restored to the area.

He also said the leaders of the warring unions have been invited for interrogation.

Adejobi said, “The Command has deployed resources to disperse and suppress the hoodlums fomenting troubles at Obalende area of Lagos State. Normalcy has been restored to the area.

“Based on preliminary findings, the crisis, that occurred today Thursday 11th February 2021, was between transport unions in the area and no life was lost.

“Six (6) suspected hoodlums have been arrested and handed over to state CID, Panti, Yaba for discreet investigation.

“The Commissioner of Police, Lagos State, CP Hakeem Odumosu, has warned that the command will not condone any act of lawlessness and criminality in the state. He however directed the area commander Area A, Lion Building, ACP Bode Ojajuni, to intensify efforts on flushing the hoodlums out of the area and on the Lagos Island in general, with the available recourses deployed to the area command.

“The leaders of transport unions in the area, however, have been invited for interrogation and further actions.”