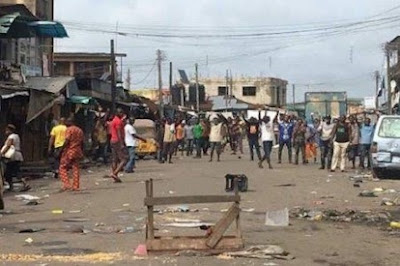 No fewer than 11 persons were reportedly buried on Sunday in the aftermath of the clash between Yoruba and Hausa residents of Shasa Market in Akinyele Local Government Area of Oyo State.

Recall that a chaos broke out in the State on Thursday when a Hausa man and a Yoruba trader clashed, leading to the death of many residents.

It was gathered that about 5,000 Hausa traders, women and children were displaced during the crisis, as many fled for their lives.

Some of the displaced persons are reportedly taking refuge at the residence of the Sarkin Shasa, Alhaji Haruna Maiyasin, and the International Institute of Tropical Agriculture (IITA), in Ibadan.

The Sarkin Sasa, who is the leader of Hausa residents in the affected area, told newsmen yesterday that 11 victims were prepared for burial in his compound.

The charred remains of 8 other people killed during the crisis were still at the police station in the Shasha area, as of yesterday evening.

“You can hear the noise, they are still here,” Alhaji Maiyasin told Daily Trust by telephone. He said the refuges in his residence were up to 3,000.

It was gathered that despite order by the state government to shut down the market, tension in the area continues to increase as the violence persists.