Rosy Meurer replies those criticizing her for getting married to Tonto Dikeh’s ex-husband, Churchill » Bazefor9ja.ComBazefor9ja.Com

Home » News » Rosy Meurer replies those criticizing her for getting married to Tonto Dikeh’s ex-husband, Churchill 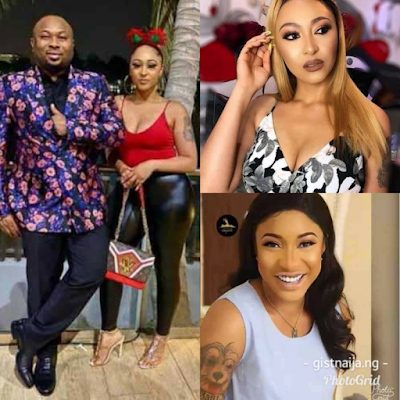 Gambian-born Nigerian actress and producer, Rosaline Ufuoma Meurer popularly known as Rosy Meurer has reacted to the online criticisms she has been getting since Tonto Dikeh’s ex-husband, Olakunle Churchill disclosed that she has officially become his MRS.

Recall that when actress Tonto Dikeh announced her separation from husband Olakunle Churchill, she mentioned that actress Rosy Meurer was having an affair with Churchill. However, Rosy denied it vehemently, she said dating Churchill will be like dating her big brother and she called him her mentor.

Well, now that Churchill has revealed that they are indeed married (read here), Rosy has now responded.

Taking to Instagram to reply those criticizing her on social media, the 29 year old wrote;

“Thank God say man no be God… #Only God can Judge” 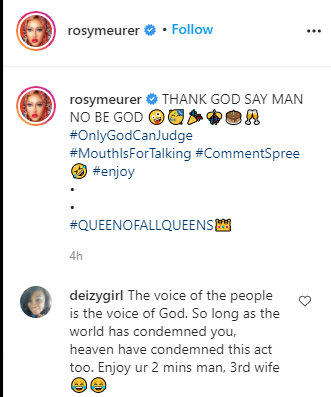 She also decided to flaunt her wedding ring

Rosy’s reply to critics has however, earned her more bashing online and many have assured her that it won’t end well.

See some of their comments below;

@hanson_idy wrote “Of course my dear. Wait for judgement day”

@adaobobo wrote “This particular relationship will end in tears,yes that’s the judgement dear”

@chocolate__smoothie wrote “don’t involve God in this…you were sleeping with someone’s husband and you denied it with your full chest,lol”