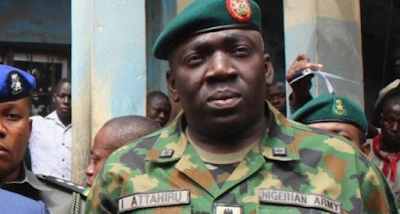 In the 2015, the army had launched operation Lafiya Dole, a code name derived from Hausa language which means “peace by all means”, and hundreds of Boko Haram insurgents had been eliminated under the operation.

In January, the army had also launched Tura Takaibango, a subsidiary of Lafiya Dole.

Visiting the Lafiya Dole theatre command in Maiduguri, Borno state on Saturday, the army chief said he had come to appraise the military operation in the Sambisa general area and boost the morale of troops prosecuting the war on terror.

He said the synergy between the air and ground forces have been excellent and has led to the recent successes recorded in the counter-insurgency operation.

“As you know, areas around Njimiya, Sabilul Huda and the entire general area where Boko Haram had deployed before now have been cleared. We can rightly say we can get to the second phase of the operation, which will start soon,” he said.

“The adversary will want to distract you and that is the example of what we had in New Marte and Dikwa. Good enough, our troops gave a good account of themselves and took on the terrorist decisively.

“We will also encourage them and bring in more combat multipliers, that is what we will continue to have all through the theatre.”

Attahiru assured Nigerians that more equipment would be deployed to all theater of operations across the country to fight insurgency and other forms of criminality.